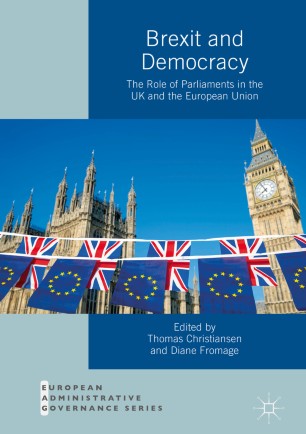 The Role of Parliaments in the UK and the European Union

This volume addresses an important aspect of Brexit that has been ever-present in public debates, but has so far not received corresponding attention by academic scholars, namely the role of parliaments and citizens in this process. To address this gap, this book brings together an international group of authors who provide a comprehensive and multidisciplinary treatment of this subject. Specifically, the contributors, scholars from the UK and across Europe, provide diverse accounts of the role of regional, national and European parliaments and citizens from the perspectives of Law, Political Science and European Studies. The book is structured in three parts focused on developments, respectively, in the UK, in the parliaments of the EU27, and at the EU level. Beyond providing a comprehensive examination of the scrutiny of Brexit, the book utilises the insights gained from this experience for a study of executive-legislative relations in the European Union more generally, examining the balance, or lack thereof, between governments and parliaments. In this way, the book also speaks to some of the long-lasting, indeed perennial questions about the effects of constitutional provisions and political practice in the context of European democracy.
Thomas Christiansen holds a Chair in European Institutional Politics at Maastricht University, the Netherlands and is Co-Director of the Centre for European Research in Maastricht (CERiM). He is Executive Editor (with Simon Duke) of the Journal of European Integration and has published widely on the politics of the European Union.
Diane Fromage is Assistant Professor of European Law at Maastricht University, the Netherlands and Research Coordinator at the Centre for European Research in Maastricht (CERiM). Her research mainly focuses on parliaments in the European Union, fiscal councils and the European Central Bank.