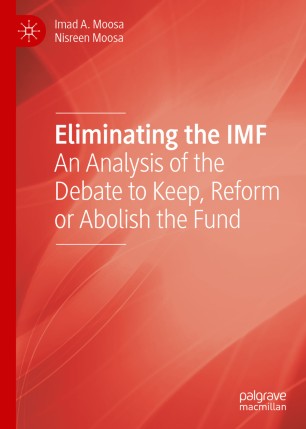 An Analysis of the Debate to Keep, Reform or Abolish the Fund

This book offers a concise but thorough analysis of the International Monetary Fund reform debate. Since the advent of the Asian financial crisis in the late 1990s, a lengthy deliberation has ensued over whether the IMF should be reformed, abolished, or left as is. The authors approach this debate from a normative perspective while looking at arguments from all sides, as well as reflecting on the history, functions, and ideology of the IMF. This unique approach gives weight to the authors’ perspectives and their conclusion that the IMF ultimately does more harm than good. Written to analyze and contribute to the current IMF debate, this Palgrave Pivot is a must-read for scholars and policymakers invested in the conversation surrounding IMF reform.

Imad A. Moosa is a Professor at RMIT, Australia. He has held several academic, professional and advisory positions in the UK, US and Australia, and he has written extensively on both economics and finance. Over the course of his career, he has published over 200 papers and 22 books, 11 of which were published with Palgrave.

Nisreen Moosa is a clinical health scientist who has turned into a health economist. She is completing her PhD on the financing of healthcare at the University of South Australia. Part of her research is on the effect of the IMF on health expenditure, particularly in developing countries.