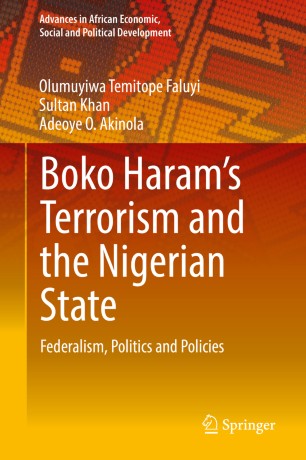 This book assesses the effectiveness of Nigeria’s counterterrorist policies against Boko Haram. It takes a critical review of the interventionist strategies adopted by the Nigerian government, highlights the motivations behind the choice of strategies, and proffers a deeper understanding of the factors responsible for the state’s inability, thus far, to rid the country of terrorism. Specifically, it evaluates the NACTEST policy framework that guides the Nigerian state’s counterterrorist strategies, which contains both hard and soft power approaches. Adopting historical and case study approaches which put the Nigerian state and occurrences of violent conflict in context, it takes cognizance of the politics of ethno-religious diversity which reinforce violent conflicts among groups and against the state, and reviews the socio-economic and political realities that led to the emergence and sustenance of Boko Haram. The volume concludes by suggesting practical policy options for combating Boko Haram and other similar armed insurrection. This book is appropriate for researchers and students interested in African politics, conflict, security, peace studies, terrorism, and counterterrorism, as well as policy makers and government departments dealing with terrorism and counterterrorism.