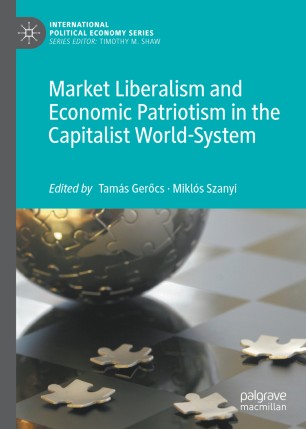 Market Liberalism and Economic Patriotism in the Capitalist World-System

This volume broadens the scope of 'comparative capitalism' within the Varieties of Capitalism (VoC) tradition. It endorses the employment of multiple perspectives, including critical political economy, institutionalist systems of capitalism, structuralist-dependency scholarship and world-systems theory. The contributors deal with the theory of economic patriotism in a conceptual framework, as well as case studies regarding rent-seeking behaviour, the patronage state in Hungary and Poland, the conflict between national regulation and the European legal framework and the perspective of wage relations in the European institutional framework. The book concludes with the legacy of developmentalism and dirigisme in a core-periphery relation, based on the French state and a range of non-European cases including Iran, Brazil and Egypt.
Tamás Gerőcs is Research Fellow in the Institute of World Economics at the Hungarian Academy of Sciences, Hungary. His research field of interest is Eastern European semi-peripheries with a special regard for economic transformation in Hungary.
Miklós Szanyi is Professor at the University of Szeged and Director of the Institute of World Economics at the Hungarian Academy of Sciences, Hungary. He has carried out extensive research work in the field of East-Central European transition, the role of multinational companies in the restructuring of CEE economies, spatial concentration processes in the region and the political economy of the transition process.