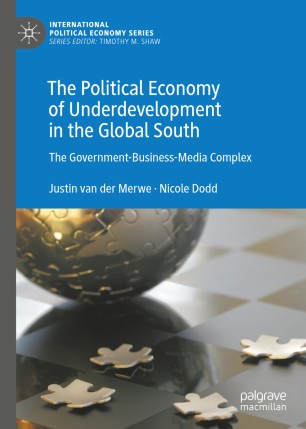 The Political Economy of Underdevelopment in the Global South

This book presents a new theory explaining underdevelopment in the global South and tests whether financial inputs, the government-business-media (GBM) complex and spatiotemporal influences drive human development. Despite the entrance of emerging powers and new forms of aid, trade and investment, international political-economic practices still support well-established systems of capital accumulation, to the detriment of the global South. Global asymmetrical accumulation is maintained by ‘affective’ (consent-forming hegemonic practices) and ‘infrastructural’ (uneven economic exchanges) labours and by power networks. The message for developing countries is that ‘robust’ GBMs can facilitate human development and development is constrained by spatiotemporal limitations. This work theorizes that aid and foreign direct investment should be viewed with caution and that in the global South these investments should not automatically be assumed to be drivers of development.

Justin van der Merwe is Senior Researcher at the Centre for Military Studies, Faculty of Military Science at the University of Stellenbosch, South Africa.

Nicole Dodd is Chair at the School for Human and Organisational Development, Faculty of Military Science at the University of Stellenbosch, South Africa.