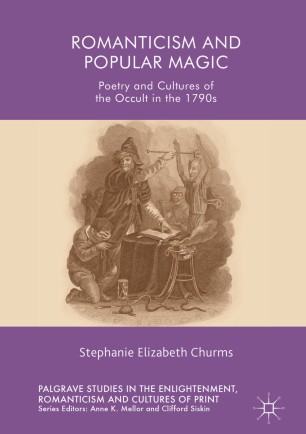 Poetry and Cultures of the Occult in the 1790s

Part of the Palgrave Studies in the Enlightenment, Romanticism and Cultures of Print book series (PERCP)

This book explores how Romanticism was shaped by practices of popular magic.  It seeks to identify the place of occult activity and culture – in the form of curses, spells, future-telling, charms and protective talismans – in everyday life, together with the ways in which such practice figures, and is refigured, in literary and political discourse at a time of revolutionary upheaval.  What emerges is a new perspective on literature’s material contexts in the 1790s – from the rhetorical, linguistic and visual jugglery of the revolution controversy, to John Thelwall’s occult turn during a period of autobiographical self-reinvention at the end of the decade.  From Wordsworth’s deployment of popular magic as a socially and politically emancipatory agent in Lyrical Ballads, to Coleridge’s anxious engagement with superstition as a despotic system of ‘mental enslavement’, and Robert Southey’s wrestling with an (increasingly alluring) conservatism he associated with a reliance on ultimately incarcerating systems of superstition.