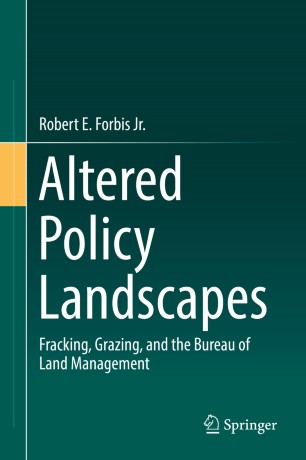 Fracking, Grazing, and the Bureau of Land Management

This book documents the United States Bureau of Land Management's (BLM) shift from a rancher-dominated agency to an energy-dominated agency. This shift is analyzed by identifying the conditions under which the expansion of hydraulic fracturing (fracking) in the Rocky Mountain West triggered a political conflict between ranching and energy stakeholder groups. Through scrutiny of federal actions and policies implemented by the Executive Branch between 2004 and 2010, the book sheds light on the emphasis of domestic energy production during this time period, and how the traditional ranching and energy alliance was split by shifting policy interests. The book is meant for policy makers, natural resource agencies, and students and researchers engaged in political science, public administration, and natural resource management.
Chapter 1 introduces readers to the case study at hand, and reviews literature on public land agencies and policies. Chapter 2 summarizes the legal history of public land management by the federal government, and the conditions that caused the BLM to favor energy development over ranching in the mid-2000's. Chapter 3 details the role of the Executive Branch (Bush-Cheney administration) in affecting the BLM's domestic energy policies and resource allocation, and chapter 4 analyzes the role of subgovernments in affecting the BLM's motivations too. Chapters 5, 6 and 7 contain first-hand accounts from government officials, state petroleum associations, and ranching supported interest groups to explore the concept of subgovernment stakeholder domination in policymaking, and analyze the similarities and differences between different policy-making elites. Chapter 8 concludes the text by summarizing subgovernment theory, mapping the behaviors of subgovernment actors, and discussing the implications for future political appointees in the direction of land-management agencies like the BLM.