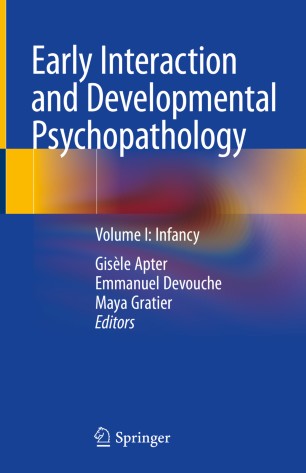 This first book of a two-volume series describes current research and state of the art clinical practice the shed light on  the developmental origins of psychopathology in the first year of life, i.e. approximately up to the emergence of secondary intersubjectivity and/or walking. The second volume explores the interactional underpinnings of  psychopathology in toddlerhood, from the time of voluntarily gross motor functioning to the emergence and basic organization of symbolic language at 24-30 months.

A comprehensive approach is adopted, focusing on the fundamentally interactive nature of early development and examining interactions both with caregivers and more broadly with the socio-cultural environment. The books describe the processes involved in psychopathological trajectories and provide clinical insight into tailored, culturally sensitive therapeutic care in diverse environments. This volume discusses in detail situations placing the infant at risk and the nature of infant development, including communication, intersubjectivity, functional development, and affective and emotional development. Culturally and socially sensitive approaches to psychopathology are examined, with examples of specific infant- and family-centered therapies. Information on risk of abuse and neglect and infant protection policies is included.

Gisèle Apter has a dual background in psychiatry and psychopathology. She is a researcher in psychopathology and perinatal psychiatry at the Paris 7 Denis Diderot University. Specialized in children's psychiatry and perinatality, she belongs to the editorial board of the journal Enfances et Psy (published by Erès), L'Information Psychiatrique (published by John Libbey-Eurotext) and the Journal of Nervous and Mental Disease ( Lippincott, Williams and Wilkins). She is responsible for the functional units of the EPS Erasme Hospital: PPUMMA (Perinatal Mobile Emergency Psychiatry in Maternity), 7th inter-sector in Hauts-de-Seine) and RePPEr (Research in Psychiatry and Psychopathology in Erasmus). It organizes the RIME network (research on mother-baby interactions), research body between Paris Descartes-Paris Diderot (Paris-Cités PRES) and Paris Ouest Nanterre.

Emmanuel Devouche is an Assistant Professor at the Department of Psychology at the University Paris Descartes and a researcher at the Laboratoire de Psychopathologie et Processus de Santé. For over two decades, he has conducted studies on parent-infant interaction during the first year of life. Currently he is investigating early communication between the mother and/or father and their newborn, up until three 3 months of age. He is also conducting a study on very early communication between preterm infants and their mother during skin-to-skin care in a level III NICU, from birth until 3 months of corrected age. He has authored or co-authored over 70 peer-reviewed journal articles in his area of expertise i.e. early parent-infant communication and at-risk interactions.

Maya Gratier is Professor of Developmental Psychology at the Université Paris Nanterre where she conducts research on the development of preverbal communication. She has a background in cross-cultural Clinical Psychology and Music Psychology. She also has a special interest in Developemental Psychopathology and, with Gisèle Apter and Emmanuel Devouche, she has studied the vocal interactions between mothers with mental health issues and their preverbal infants. She also studied the vocal interactions between infants later diagnosed with Autism and their mothers. She is currently collaborating with ethologists on the social bases of vocal expression in infants and birds and she heads the BabyLab at Nanterre University. She has authored 40 scientific papers and co-authored a book.