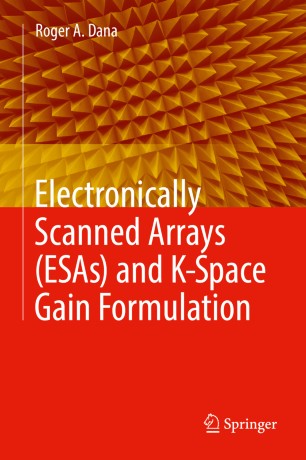 This book fills in details that are often left out of modern books on the theory of antennas. The starting point is a discussion of some general principles that apply to all electronic systems and to antennas in particular. Just as time domain functions can be expanded in terms of sine waves using Fourier transforms, spatial domain functions can be expanded in terms of plane waves also using Fourier transforms, and K-space gain is the spatial Fourier transform of the aperture weighting function. Other topics discussed include the Discrete Fourier Transform (DFT) formulation of antenna gain and what is missing in this formulation, the effect of sky temperature on the often specified G/T ratio of antennas, sidelobe control using conventional and novel techniques, and ESA digital beamforming versus adaptive processing to limit interference.

Presents content the author derived when first asked to evaluate the performance of an electronically scanned array under design with manufacturing imperfections and design limitations;

Enables readers to understand the firm theoretical foundation of antenna gain  even when they must start from well-known formulations rather than first principles;

Explains in a straightforward manner the relationship between antenna gain and aperture area;

Discusses the relationship between sidelobe control algorithms and aperture shape, how to take advantage of it, and what the penalties are;

Shows the equivalence of Minimum-Variance, Distortionless Response (MVDR) and Space-Time Adaptive Processing (STAP) and how these algorithms can be used with ESA subarrays to mitigate interference.