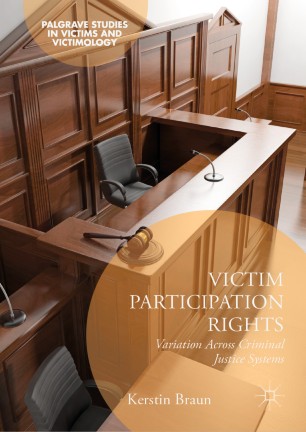 This book traces victims’ active participatory rights through different procedural stages in adversarial and non-adversarial justice systems, in an attempt to identify what role victims play during criminal proceedings in the domestic setting. Braun analyses countries with different legal traditions, including: the United States, England, Wales and Australia (as examples of mostly adversarial countries); Germany and France (as examples of inquisitorial systems); as well as Denmark and Sweden with their mixed inquisitorial-adversarial background. Victim Participation Rights is distinctive in that it assesses the implementation of formal processes and procedures concerning victim participation at three different procedural stages: first, investigation and pre-trial; second, trial and sentencing; and third, post-trial with a focus on appeal and parole. In addition, Braun provides an in-depth case study on the general position of victims in criminal trials, especially in light of national criminal justice policy, in Germany, a mostly inquisitorial system and Australia, a largely adversarial system. In light of its findings, the book ponders whether, at this stage in time, a greater focus on victim protection rather than on active procedural rights could be more beneficial to enhancing the overall experience of victims. In this context, it takes a close look at the merits of introducing or expanding legal representation schemes for victims.