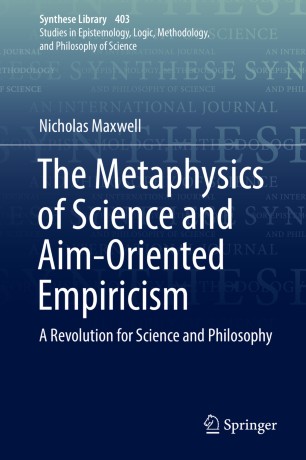 The Metaphysics of Science and Aim-Oriented Empiricism

A Revolution for Science and Philosophy

In connection with the first, it is argued that physics is concerned only with a highly selective aspect of all that there is - that aspect that determines how events unfold. Physics ignores human experience and consciousness, first because they are not needed to fulfil the predictive and explanatory tasks of physics, and second because they must be ignored if physics is to develop the beautifully explanatory theories that it does develop.

In connection with the second fundamental problem, it is argued that physics, as a result of accepting unified theories only, makes a highly problematic metaphysical assumption about the nature of the physical universe: it is such that some unknown, unified "theory of everything" is true. Precisely because this assumption is so profoundly problematic, it needs to be made explicit within physics, so that it can be critically assessed and, we may hope, improved. The author puts forward a revolutionary philosophy of science called aim-oriented empiricism (AOE), designed to facilitate improvement in the metaphysics of physics, as physics proceeds.

The author has devoted many years developing AOE and publishing papers on it. Here he spells out the implications of AOE for the metaphysics of science. The main body of the book expounds and critically assesses many key works in the metaphysics of science published from 2007 to 2018. The book concludes by considering the broader implications of aim-oriented empiricism, for science, for academic inquiry and, even, for the future of humanity.

Metaphysics of science Aim-oriented empiricism Revolution for science and philosophy The problem of induction Physicalism Unity of theory Metaphysics as an integral part of science Science and values Scientific realism The problem of truth in science Rationality The philosophy of the social sciences Science, academic inquiry and civilization Underdetermination of theory Problems of scientific progress Academic inquiry, knowledge and wisdom Academia as the rational pursuit and promotion of social wisdom The role of symmetry principles in physics Scientific explanation Science and human experience