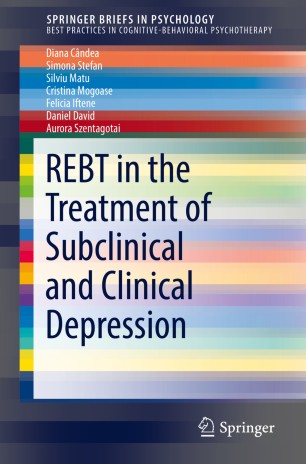 REBT in the Treatment of Subclinical and Clinical Depression

The clinical protocols included in this book are focused both on clinical and subclinical depression and are targeted for both adults and youth. After providing a concise overview on depression and the empirical data supporting the clinical protocols, the book illustrates REBT/CBT protocols that provide essential guidance on how to address depression by practitioners at all levels of expertise (e.g. therapists in training and/or more experienced therapists). ​​ ​​ The field of psychotherapy research is now at a stage where the efficacy (i.e., how treatments work in controlled studies) and effectiveness (i.e., how treatments work in real life) of psychological treatments have been demonstrated for a large spectrum of disorders (Barlow, 2001). Cognitive – behavior therapies (CBT) are considered the gold standard for empirically validated forms of psychotherapy in the treatment of clinical and subclinical depression, showing short- and long-term effects (see Barlow, 2001; Chambless & Hollon, 1998) that are at least as strong as those of pharmacotherapy (medication) or other therapies (i.e., interpersonal therapy; DeRubeis et al., 200 5; Hollon et al., 2005; Shea et al., 1992) and it is hoped that these treatments will help not only treat but also prevent the onset of major depression (Cuijpers, Smit, & Straten, 2007). Cognitive –behavior therapies are based on the premise that psychological problems stem from dysfunctional cognitions (Beck, Rush, Shaw, & Emery, 1979; Ellis, 1962). In CBT, the therapist works with the client to identify and focus upon dysfunctional cognitions to modify them and remedy associated emotional and/or behavior al consequences. Two of the most influential and widespread forms of CBT are cognitive therapy (CT) and rational emotive behavior therapy (REBT) (Elis, 1987; David, 2007; David & Szentagotai, 2006).