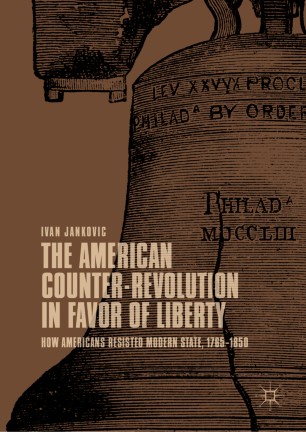 The American Counter-Revolution in Favor of Liberty

This book presents the case that the origins of American liberty should not be sought in the constitutional-reformist feats of its “statesmen” during the 1780s, but rather in the political and social resistance to their efforts. There were two revolutions occurring in the late 18th century America: the modern European revolution “in favour of government,” pursuing national unity, “energetic” government and centralization of power (what scholars usually dub “American founding”); and a conservative, reactionary counter-revolution “in favour of liberty,” defending local rights and liberal individualism against the encroaching political authority. This is a book about this liberal counter-revolution and its ideological, political and cultural sources and central protagonists. The central analytical argument of the book is that America before the Revolution was a stateless, spontaneous political order that evolved culturally, politically and economically in isolation from the modern European trends of state-building and centralization of power. The book argues, then, that a better model for understanding America is a “decoupled modernization” hypothesis, in which social modernity is divested from the politics of modern state and tied with the pre-modern social institutions.