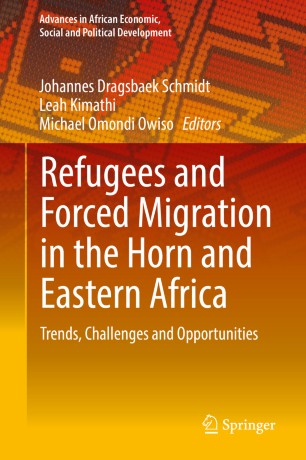 Refugees and Forced Migration in the Horn and Eastern Africa

This volume sheds new light on the refugees and forced migration at the Horn of Africa and East Africa. Adopting a multidisciplinary perspective, it traces historical, structural, and geopolitical factors to reveal the often brutal uprooting of people in a region that hosts more than three million refugees and almost six million internally displaced persons (IDPs). By doing so, it enriches our understanding of the socio-economic, geopolitical and humanitarian causes and implications of migration and population displacement.
The book is divided into five parts, focusing on different drivers of involuntary displacement and people’s uprooting: The first part covers geopolitical conflicts rooted partly in the colonial and Cold War geographies. The second part then focuses on security aspects and conflicts, while the third looks at encampment and refugee policies as well as refugee agencies. Part four highlights issues of forced repatriation and human trafficking. Lastly, part five analyzes the dynamics of refugee camps.

Johannes Dragsbaek Schmidt studied International Relations and Development Studies at Aalborg University, Denmark and is currently Associate Professor at the Department of Political Science. He has been awarded visiting research fellowships in Australia, Thailand, Malaysia, Indonesia, the Philippines and Poland, and the Institute for Political Economy, Carleton University, Canada. He has recently been involved in EU-funded research on foreign policy in India and a Danish government-funded project on health and education in Bhutan. His research interests range from globalization and international division of labor to social and welfare policy and state regulations with a focus on East Asia, South-East Asia and South Asia. Most recent publications include: Globalization and Social Change (with Jacques Hersh; Routledge 2002); The New Political Economy of Southeast Asia (with Rajah Rasiah; Edward Elgar 2011) and Development Challenges in Bhutan: Perspectives on Inequality and Gross National Happiness (Springer 2017).

Leah Kimathi is a researcher and social activist. She has worked in program management in East Africa with national and international organizations including the United Nations Development Program in the fields of elections and governance, forced migration and humanitarian assistance, protection, peace and security.  Currently, she is undertaking a PhD in Governance and Management at the Jomo Kenyatta University of Agriculture and Technology, Kenya. Her research interests are on the state in Africa, having published on the same with CODESRIA and The Institute for Democracy and Electoral Assistance (IDEA) among other publishers.

Michael Omondi Owiso received his PhD in Political Science from Aalborg University, Denmark, entitled "Transitional Justice and the Institutionalization of Democracy: Historical Legacies and the Truth Process in Kenya”. Previously, he received his MA in International Relations from the United States International University, Africa. He is currently a lecturer in the Department of Political Science, School of Development and Strategic Studies at Maseno University, Kenya. He is also a researcher, trainer and mentor at the African Leadership Center - King's College, London, UK. He has received funding from the EU, the Nordic Africa Institute in Sweden, Hilfe für Afrika in Austria and the Maryknoll Peace Award in the United States. Owiso has published widely on issues related to political economy, peace, conflict and security studies, health and migration and his latest work will appear in the forthcoming Handbook for Peace Approaches (Palgrave).