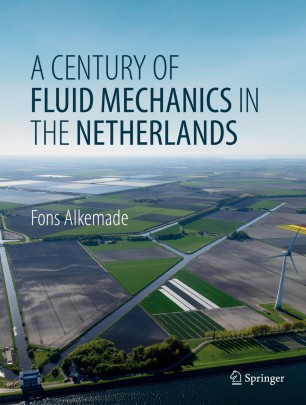 A Century of Fluid Mechanics in The Netherlands

In October 1918, Jan Burgers, 23 years old, started as professor of ‘aerodynamics, hydrodynamics, and their applications’ at the Technical University in Delft. This can be regarded as the birth of fluid mechanics in the Netherlands, not only as an academic discipline but also as the start of the serious study of flow phenomena in engineering environments. During the period of Burgers’ tenure in Delft (till 1955) three Dutch institutes were founded which to this day remain important centres of research in various fields of fluid mechanics: aerospace engineering, hydraulics, and naval engineering. Burgers and others developed mathematical, experimental, and numerical approaches of a broad range of fluid flows; some of their achievements have become well-known worldwide and can be seen as highlights of Dutch fluid mechanics. From the 1950s ‘stromingsleer’ (flow theory) attained a permanent and respected place in the curriculum and research of  (technical) universities, at many old and new research institutes and also at several industrial research laboratories. In the 1980s fluid mechanics finally became ‘recognized’ as a serious branch of physics and an important field of (applied) science. This resulted in a close cooperation between academic groups, institutes and industry and the foundation of the Burgerscentrum, the Research School for Fluid Mechanics in the Netherlands.

One hundred years after Burgers’ appointment in Delft, Dutch fluid mechanics is still very much alive. This volume gives a full account of its rich history and also offers a view on the broad range of areas of application: transport, energy production, biology and medicine, production processes, etc. It has been written not only for those working in this field but also for those interested in the history of Dutch science and in the development of science and the fascinating world of fluid flow phenomena.