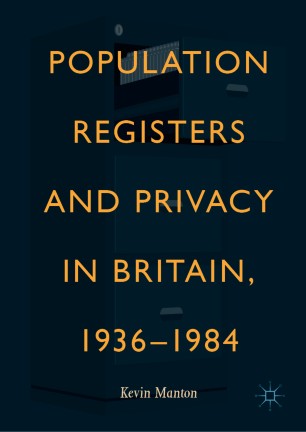 'An impressively detailed analysis of the debates in the British central state regarding the need to create an integrated state information system to facilitate policy, and how this came into conflict with popular fears of state intrusion into individual privacy.   In our contemporary world, where state and commercial use, and misuse, of personal data is still a burning issue, this work is of great importance.'

‘Kevin Manton gives us a rich, detailed and theoretically informed study of the tensions over the government's attempts to collect and use personal data on citizens. Anyone interested in the surprisingly long history of Big Data in the United Kingdom will need to read this book.’

This book examines the fraught political relationship between British governments, which wanted information about peoples’ lives, and the people who desired privacy. To do this it looks at something that Britain only experienced in wartime, a centralized and up-to-date list of everyone in the country: a population register. The abolition of this wartime system is contrasted with later attempts to reintroduce registration, and the change in the political mind-set driving these later schemes to develop centralised webs of so-called objective data is examined. These policies were confronted by privacy campaigns, studied here, but it is shown how government responses succeeded in turning political debates about data into technical discussions about computerization; thus protecting its data, largely on paper, from oversight. This reformulation also shaped the 1984 Data Protection Act, which consequently did not protect privacy but rather increased government’s ability to gain knowledge of, and hence power over, the people.