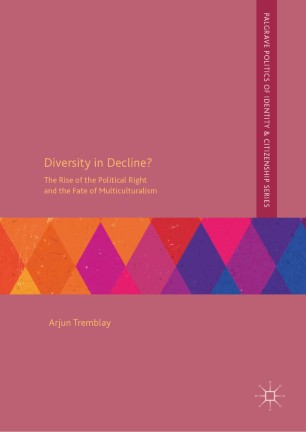 The Rise of the Political Right and the Fate of Multiculturalism

In this book, Arjun Tremblay considers the future of multiculturalism, contextualised within an ideological and political shift to the right. Is there any hope that multiculturalism will survive alongside the rise of the political right across democracies? How can policy makers continue to recognize and to accommodate minorities in an increasingly inhospitable ideological environment?

Based on evidence from three cases studies, Tremblay develops a hypothesis of multicultural outcomes, arguing that while the threat to multiculturalism is real, there still is hope, and that not only is the fate of minority rights in liberal democracies far from sealed, but it may still be possible to further protect the rights of immigrant and other minority groups in years to come. In order to do this, proponents of diversity politics may need to reconceptualise multiculturalism and other minority rights along instrumental lines as a means to fulfil policy objectives above and beyond the recognition and accommodation of immigrant minorities. This will be an important read for scholars interested in minority rights, multiculturalism, diversity politics, comparative politics, institutionalism, right-wing and far-right studies, and public policy.