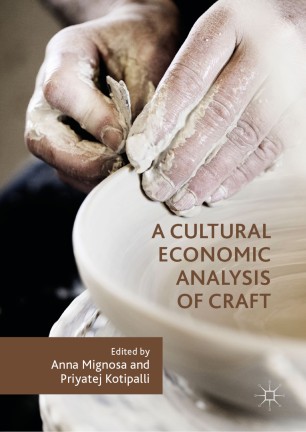 A Cultural Economic Analysis of Craft

Are we aware of the values of craft? In this edited volume, cultural economists, researchers and professionals provide an interdisciplinary discussion of the relevance and contribution of the craft sector to the economy, as well as to society at large.

Mignosa and Kotipalli bring together contributors to compare the craft sector across countries, analysing the role of institutions, educational bodies, organisations and market structure in its evolution and perception. The Western approach to craft and its subordinate position to the arts is contrasted with the prestige of craftmanship in Eastern countries, while the differing ways that craft has attracted the attention of policy agencies, museums, designers and private institutions across regions is also analysed. This volume is vital reading to those interested in the economic features of craft and craftsmanship around the world, as well as for those interested in the importance of policy in bringing about effective sustainable development.

Anna Mignosa is Assistant Professor at the University of Catania, Italy, and Lecturer at the Erasmus University, Rotterdam, the Netherlands. Her field of research is cultural economics, specifically cultural heritage and cultural policies. Mignosa is particularly interested in the potential effect of research on society. She had been member of the Board of the Association of Cultural Economics and is one of the founders of Officine Culturali and of CREARE.

Priyatej Kotipalli holds a PhD from Erasmus University, Rotterdam, The Netherlands. His primary research interest is in the economics of intangible cultural heritage with a special focus on traditional knowledge and skills. He serves on the board of various cultural organisations in the Netherlands and India. He is also member of the National Scientific Committee of Intangible Cultural Heritage, ICOMOS India, and of the Crafts Council of Telengana, India.