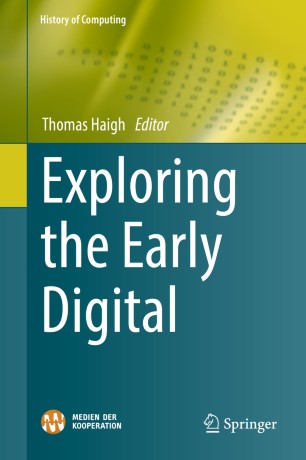 Changes in the present challenge us to reinterpret the past, but historians have not yet come to grips with the convergence of computing, media, and communications technology. Today these things are inextricably intertwined, in technologies such as the smartphone and internet, in convergent industries, and in social practices. Yet they remain three distinct historical subfields, tilled by different groups of scholars using different tools. We often call this conglomeration “the digital,” recognizing its deep connection to the technology of digital computing. Unfortunately, interdisciplinary studies of digital practices, digital methods, or digital humanities have rarely been informed by deep engagement with the history of computing.
Contributors to this volume have come together to reexamine an apparently familiar era in the history of computing through new lenses, exploring early digital computing and engineering practice as digital phenomena rather than as engines of mathematics and logic. Most focus on the period 1945 to 1960, the era in which the first electronic digital computers were created and the computer industry began to develop. Because digitality is first and foremost a way of reading objects and encoding information within them, we are foregrounding topics that have until now been viewed as peripheral in the history of computing: betting odds calculators, card file systems, program and data storage, programmable calculators, and digital circuit design practices. Reconceptualizing the “history of computing” as study of the “early digital” decenters the stored program computer, repositioning it as one of many digital technologies.

Thomas Haigh is an Associate Professor of History at the University of Wisconsin-Milwaukee and a visiting Comenius Professor for the History of Computing at Siegen University. He writes the historical reflections column for Communications of the ACM, and from 2005 to 2014 was chair of SIGCIS, the group for historians of information technology.

His publications cover a broad range of topics, from the business history of the World Wide Web, to the gendered labor history of data processing and the intellectual history of computer science. He is the primary author of ENIAC in Action (MIT, 2016), editor of Histories of Computing (Harvard, 2011) and the lead editor of the “Histories of the Internet” special edition of Information & Culture (2015).

Haigh is a Fulbright Award winner and in 2017 received the Wilkins and Scranton prizes from the Business History Conference.