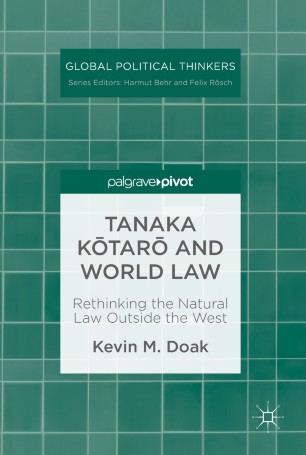 Rethinking the Natural Law Outside the West

This book explores one of the 20th century’s most consequential global political thinkers and yet one of the most overlooked. Tanaka Kōtarō (1890-1974) was modern Japan’s pre-eminent legal scholar and jurist. Yet because most of his writing was in Japanese, he has been largely overlooked outside of Japan. His influence in Japan was extraordinary: the only Japanese to serve in all three branches of government, and the longest serving Chief Justice of the Supreme Court. His influence outside Japan also was extensive, from his informal diplomacy in Latin America in the prewar period to serving on the International Court of Justice in the 1960s. His stinging dissent on that court in the 1966 South-West Africa Case is often cited even today by international jurists working on human rights issues. Above and beyond these particular lines of influence, Tanaka outlined a unique critique of international law as inherently imperialistic and offered as its replacement a theory of World Law (aka “Global Law”) based on the Natural Law. What makes Tanaka’s position especially notable is that he defended the Natural Law not as a European but from his vantage point as a Japanese jurist, and he did so not from public law, but from his own expertise in private law. This work introduces Tanaka to a broader, English-reading public and hopes thereby to correct certain biases about the potential scope of ideas concerning human rights, universality of reason, law and ethics.
Kevin M. Doak is the Nippon Foundation Endowed Chair & Professor of Japanese Studies at Georgetown University, Washington DC, USA.