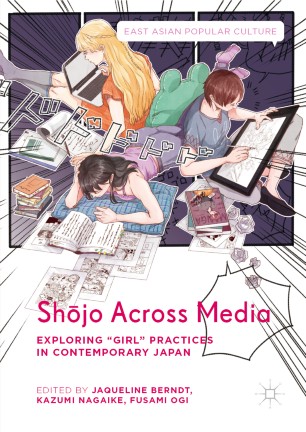 Since the 2000s, the Japanese word shōjo has gained global currency, accompanying the transcultural spread of other popular Japanese media such as manga and anime. The term refers to both a character type specifically, as well as commercial genres marketed to female audiences more generally. Through its diverse chapters this edited collection introduces the two main currents of shōjo research: on the one hand, historical investigations of Japan’s modern girl culture and its representations, informed by Japanese-studies and gender-studies concerns; on the other hand, explorations of the transcultural performativity of shōjo as a crafted concept and affect-prone code, shaped by media studies, genre theory, and fan-culture research.

While acknowledging that shōjo has mediated multiple discourses throughout the twentieth century—discourses on Japan and its modernity, consumption and consumerism, non-hegemonic gender, and also technology—this volume shifts the focus to shōjo mediations, stretching from media by and for actual girls, to shōjo as media. As a result, the Japan-derived concept, while still situated, begins to offer possibilities for broader conceptualizations of girlness within the contemporary global digital mediascape.

Jaqueline Berndt is Professor of Japanese Studies at Stockholm University, Sweden. She has been involved in the formation of academic Manga Studies in Japan since the early 2000s. Her research interest in manga has been shaped primarily by Art, Media, and Exhibition Studies.

Fusami Ogi is Professor of English at Chikushi Jogakuen University, Japan. She has made her mark beyond Japan, with publications covering the pioneering women artists who have been remembered in manga history as the Magnificent 49ers. For many years, she headed the publicly funded Women’s MANGA Research Project, which gave rise to this volume.

“Shōjo Across Media is a strong addition to the growing body of scholarship on shōjo studies and suggests many exciting new directions and areas of inquiry. The chapters are written in a clear, accessible style that make them appropriate and useful for undergraduate teaching. The volume should appeal to scholars of contemporary Japan, particularly those focused on areas related to gender, manga, anime, literature, film, music, and fashion.” (Deborah Shamoon, Journal of Japanese Studies, Vol. 47 (1), 2021)