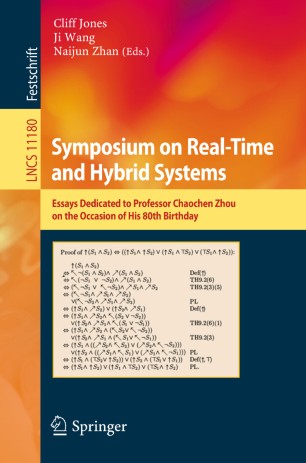 Symposium on Real-Time and Hybrid Systems

This volume is published in honor of Professor Chaochen Zhou’s 80th birthday. The Festschrift contains 13 refereed papers by leading researchers who were among the participants of the celebratory conference in Changsha, China that took place in October 2017.
The papers cover a broad spectrum of subjects related to Formal Methods for the development of computer systems. Topics include Probabilistic Programming, Concurrency, Quantum Computing, Domain Engineering, Real-time and Hybrid Systems, and Cloud Computing.
Chaochen Zhou is internationally recognized for his own contributions and for the wide influence that he has had through his appointments in Oxford (UK) where he collaborated with Professor Tony Hoare, Lyngby (Denmark) where he worked with Professor Dines Bjørner, UNU-IIST (Macau) where he moved from being Principal Research Fellow to his appointed as Director of the Institute, as well as in Beijing.
His book on the Duration Calculus (joint with Michael Hansen) made a seminal contribution to specifying and reasoning about real-time systems. Chaochen Zhou’s contributions have been marked by his election as a member of the Chinese Academy of Sciences.