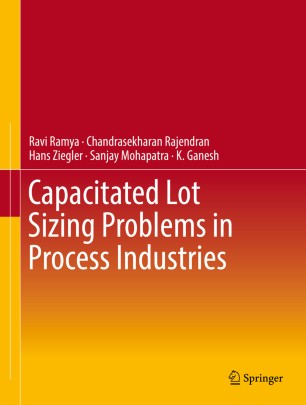 This book examines the Capacitated Lot Sizing Problem (CLSP) in process industries. In almost all process industries, there are situations where products have short/long setup times, and the setup of the product and its subsequent production are carried over, across consecutive periods. The setup of a product is carried over across more than one successive period in the case of products having long setup times. A product having short setup has its setup time less than the capacity of the period in which it is setup. The setup is immediately followed by its production of the product and it may also be carried over, across successive time period(s). Many process industries require production of a product to occur immediately after its setup (without the presence of idle time between the setup and production of the product), and they also require the product to be continuously produced without any interruption. This book considers a single-machine, single-level and multiple-item CLSP problem. This book introduces the Capacitated Lot Sizing Problem with Production Carryover and Setup Crossover across periods (CLSP-PCSC). Mathematical models are proposed which are all encompassing that they can handle continuous manufacturing (as in process industries), and also situations where the setup costs and holding costs are product dependent and time independent/time dependent, with possible backorders, and with other appropriate adaptations.  Comprehensive heuristics are proposed based on these mathematical models to solve the CLSP-PCSC. The performance of the proposed models and heuristics are evaluated using problem instances of various sizes. This book also covers mathematical models developed for the Capacitated Lot Sizing Problem with Production Carryover and Setup Crossover across periods, and with Sequence-Dependent Setup Times and Setup Costs (CLSP-SD-PCSC). These models allow the presence of backorders and also address real-life situations present in process industries such as production of a product starting immediately after its setup and its uninterrupted production carryover across periods, along with the presence of short/long setup times. Heuristics proposed for the CLSP-PCSC can be extended to address the CLSP problem with sequence dependent setup costs and setup times. All the models and heuristics proposed in this book address some real-life considerations present in process industries.