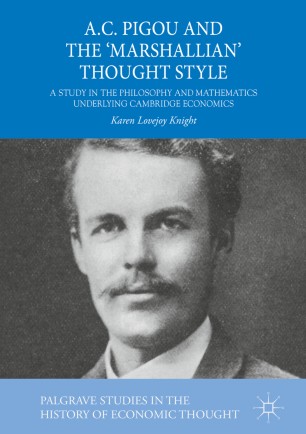 A Study in the Philosophy and Mathematics Underlying Cambridge Economics

This book provides a study of the forces underlying the development of economic thought at Cambridge University during the late nineteenth century and the first half of the twentieth century. The primary lens it uses to do so is an examination of how Arthur Cecil Pigou’s thinking, heavily influenced by his predecessor, Alfred Marshall, evolved.

Aspects of Pigou’s context, biography and philosophical grounding are reconstructed and then situated within the framework of Ludwik Fleck’s philosophy of scientific knowledge, most notably by drawing on the notions of ‘thought styles’ and ‘thought collectives’. In this way, Knight provides a novel contribution to the history of Pigou's economic thought.

Karen Lovejoy Knight is Economics Tutor and Sessional Lecturer at the University of Notre Dame, Western Australia and Edith Cowan University, Western Australia. She is also a business consultant and independent researcher. Her research interests lie in the history of economic thought, economic history, political economy, the sociology of scientific knowledge and philosophy.