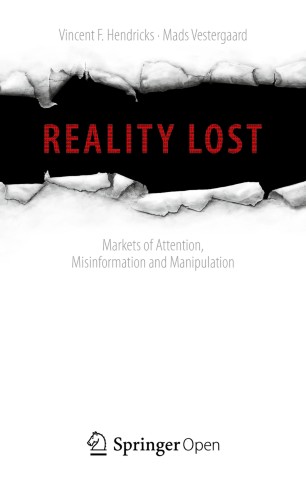 Markets of Attention, Misinformation and Manipulation

This open access book looks at how a democracy can devolve into a post-factual state.

The media is being flooded by populist narratives, fake news, conspiracy theories and make-believe. Misinformation is turning into a challenge for all of us, whether politicians, journalists, or citizens. In the age of information, attention is a prime asset and may be converted into money, power, and influence – sometimes at the cost of facts. The point is to obtain exposure on the air and in print media, and to generate traffic on social media platforms. With information in abundance and attention scarce, the competition is ever fiercer with truth all too often becoming the first victim.

Reality Lost: Markets of Attention, Misinformation and Manipulation is an analysis by philosophers Vincent F. Hendricks and Mads Vestergaard of the nuts and bolts of the information market, the attention economy and media eco-system which may pave way to postfactual democracy. Here misleading narratives become the basis for political opinion formation, debate, and legislation. To curb this development and the threat it poses to democratic deliberation, political self-determination and freedom, it is necessary that we first grasp the mechanisms and structural conditions that cause it.

Vincent F. Hendricks is Professor of Formal Philosophy at The University of Copenhagen. He is Director of the Center for Information and Bubble Studies (CIBS) sponsored by the Carlsberg Foundation and has been was awarded a number of prizes for his research among them The Elite Research Prize by the Danish Ministry of Science, Technology and Innovation, The Roskilde Festival Elite Research Prize, Choice Magazine Outstanding Academic Title Award and The Rosenkjær Prize. He was Editor-in-Chief of Synthese: An International Journal for Epistemology, Methodology and Philosophy of Science between 2005-2015.

Mads Vestergaard (b. 1979) is PhD Fellow at Center for Information and Bubble Studies (CIBS), University of Copenhagen. He holds a M.A. in philosophy, and debates and communicates philosophy and social science in written press, radio and television. He has also applied philosophy in more untraditional contexts as art projects and satire.