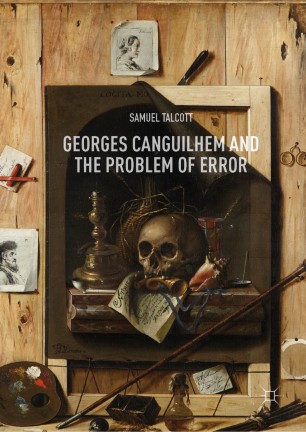 Georges Canguilhem and the Problem of Error

Examining Georges Canguilhem’s enduring attention to the problem of error, from his early writings to Michel Foucault’s first major responses to his work, this pathbreaking book shows that the historian of science was also a centrally important philosopher in postwar France. Samuel Talcott elucidates Canguilhem’s contributions by drawing on previously neglected publications and archival sources to trace the continuity of commitment that led him to alter his early anti-vitalist, pacifist positions in the face of political catastrophe and concrete human problems. Talcott shows how Canguilhem critically appropriated the philosophical work of Alain, Bergson, Bachelard, and many others while developing his own distinct writings on medicine, experimentation, and scientific concepts in an ethical and political endeavor to resist alienation and injustice. And, while suggesting Canguilhem’s sometimes surprising philosophical importance for a range of younger thinkers, the book demonstrates Foucault’s own critical allegiance to Canguilhem’s spirit, techniques, and investigations.