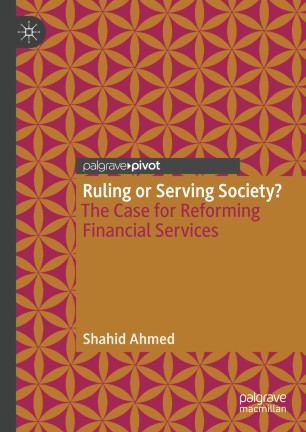 The Case for Reforming Financial Services

This book argues that the 2007/08 financial crisis revealed fundamental flaws in how the financial sector had evolved over the previous three decades. While access to financial services has improved, the total stock of debt in the global economy has risen to more than twice the size of global GDP. Financial services now play a far bigger role in all economies, developed and developing, than in the 1960s. This development has produced few, if any, worthwhile benefits. The book concludes that the largely deregulated financial sector needs to be radically reformed.

The first of these reforms would be to establish the pre-eminence of the public interest in how financial services operate. ​The second would involve breaking up financial institutions that have become much too big. Third, the phenomenon of financialization needs to be regulated and controlled. Finally, all countries need to work- both nationally and internationally- towards a more democratized, more robust, and less laissez faire system of socially progressive financial sector regulation to make it subservient to the needs of society rather than the other way round.

This Palgrave Pivot will be of interest to economists, financiers and banking specialists, interested in an informed debate on the causes and consequences of the 2007/2008 financial crisis.

Shahid Ahmed read Economics at Cambridge University, UK, before joining the State Bank of Pakistan. He subsequently worked in international and development banking in London, Abu Dhabi and Dubai between 1976 and 1996. He served with the United Nations Economic and Social Commission for Asia and the Pacific in Bangkok. He is the author of Rentier Capitalism: Disorganised Development and Social Injustice in Pakistan (Palgrave Macmillan, 2016).