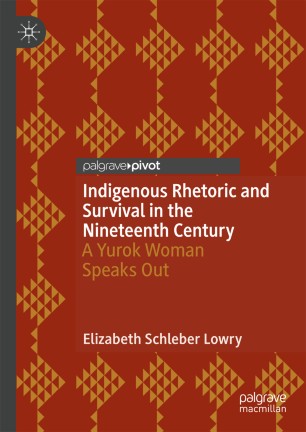 Indigenous Rhetoric and Survival in the Nineteenth Century

A Yurok Woman Speaks Out

In 1916, Lucy Thompson, an indigenous woman from Northwestern California, published To the American Indian: Reminiscences of a Yurok Woman. The first book to be published by a member of the California Yurok tribe, it offers an autobiographical view of the intricacies of life in the tribe at the dawn of the twentieth century, as well as a powerful critique of the colonial agenda. Elizabeth Schleber Lowry presents a rhetorical analysis of this iconic text, investigating how Thompson aimed to appeal to diverse audiences and constructed arguments that still resonate today. Placing Thompson’s work in the context of nineteenth-century Native American rhetoric, Lowry argues that Thompson is a skillful rhetor who has much to teach us about our nation’s violent past and how it continues to shape our culture and politics. In To the American Indian, Thompson challenges negative stereotypes about indigenous cultures and contrasts widespread Euroamerican abuse of natural resources with Yurok practices that once effectively maintained the region’s ecological and social stability. As such, Thompson’s text functions not only as a memoir, but also as a guide to sustainable living.