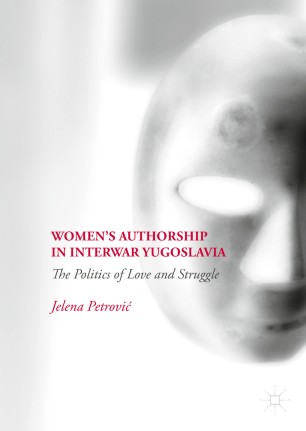 The Politics of Love and Struggle

This book highlights the extent to which women were positioned as historical subjects in the process of constructing political, social, and cultural history in Yugoslavia, while simultaneously facing the politics of institutional exclusion and academic ignorance of progressive ideas and emancipatory struggles. To this effect, the book interprets a series of works written in interwar Yugoslavia by women or about women’s position in public space. The research corpus is varied, including LGBT literature, autobiographies, travelogues, literary correspondence, political writings, parody, bibliographies and dictionaries, etc. The book argues that women have been programmatically made absent from the so-called universal canon of (post)Yugoslav literature, or else negatively valorised or labeled, while at the same time women’s writing in interwar Yugoslavia reflected, articulated and mapped significant social, political and cultural issues. The book proposes a re-reading of the once censored and forgotten texts to counter the politics of exclusion that operates even today in the post-Yugoslav space. This re-reading is carried out in the light of contemporary feminist theories and aims to reveal and emphasise the emancipatory importance of women’s authorship. In this way, Jelena Petrović provides a fresh perspective on the topical issue of the still contested (post)Yugoslav space.

Jelena Petrović is a feminist scholar, art theoretician and curator. She has co-authored many texts, events and projects related to the (mis)interpretative models of the (post)Yugoslav history, literature, art-theory and feminism. She was appointed as an Endowed Professor
for Central and South Eastern European Art Histories at the Academy of Fine Arts in Vienna (2015-2017). Recent publications include ‘What Does the Freedom Stand for Today?’ in Border Thinking, edited by Marina Gržinić (2018).