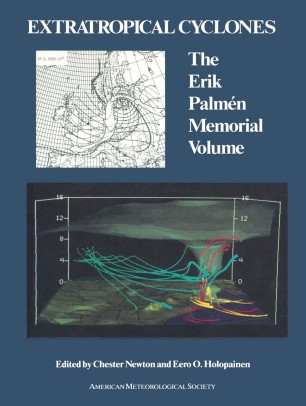 This book is composed of 12 review papers invited for the Palmen Memorial Symposium on Extratropical Cyclones held in Helsinki, Finland, 29 August - 2 September 1988. To celebrate the 90th anniversary of the birth of Professor Erik Palmén, this symposium was organized to give a state-of-the-art picture of research on the structure and dynamics of extratropical cyclones, a topic which Palmén pioneered during the era of advances in aerological analysis. This symposium was organized by the Geophysical Society of Finland and the American Meteorological Society in cooperation with the Danish, Norwegian and Swedish Geophysical Societies.
Extratropical Cyclones offers state-of-the-art information on extratropical cyclones, and recent findings by European and American authorities in various subject areas.
The first two chapters discuss Palmen's works on cyclones and his early general circulation concepts. The ten chapters following chronicle the advances in understanding cyclones; the theory, structure, and physical processes of cyclones; orographic cyclogenesis; and more. Extratropical Cyclones also contains synoptic case analyses, modeling results, examples of the phenomena discussed, and abundant references.
While particular aspects are emphasized in the individual contributions, the book as a whole summarizes the major features of various kinds of extratropical cyclones based on observational analyses, theory and numerical experimentation.
This volume is of interest to researchers in dynamic and synoptic meteorology, climatology and mesometeorology, as well as in numerical modeling and weather forecasting. It is also useful for meteorology courses at graduate and upper undergraduate levels.

Chester W. Newton started his influential career in meteorology as a weather observer in Phoenix in the late 1930s in Phoenix, Arizona, USA. After completing the Air Coprs Cade Program in meteorology, he studied at the University of Chicago, where he obtained his B.S. (1946), M.S. (1947), and Ph.D. (1951) degrees after serving in the military forecasting for aircraft traveling to China. His principal mentor was Eric Palmén, although C.G. Rossby also greatly influenced his work. At Rossby's invitation he spent two years in Stockholm, Sweden, continuing his work on shear lines and another project with his wife Harriet Rodebush, looking at the nature of squall lines. After a summer at Woods Hole, Massachusetts, Dr. Newton continued to be at the forefront of meteorological research as an assistant to Sverre Petterssen, who was then head of the Weather Forecasting Research Center in Chicago, USA. Newton moved on to serve as Chief Scientist for the National Sever Storms Project, where he focused his research on frontal structure, the jet stream and thunderstorms.
Dr. Newton was active in the American Meteorological Society (AMS) throughout his career. He was associate editor of the Journal of Meteorology, the Journal of Applied Meteorology, and Meteorological Monographs at various times in the 1960s and early 1970s. When NOAA asked AMS to take over publication of Monthly Weather Review (MWR) in 1974, Dr. Newton and Dr. Rodebush teamed up to serve as its first AMS editors. Chester Newton served as AMS councilor and, later, as president. He was awarded the Society's Franklin Brooks award "for his wise leadership as president and his long record of devoted service to the American Meteorological Society as editor of its journals and member of its committees." He was a Fellow, a Certified Consulting Meteorologist, and Honorary Member of the Society. Dr. Newton was a member of the American Geophysical Union (AGU) and the Royal Meteorological Society, and a Fellow of the American Association for the Advancement of Science. He received the Editor's award from both AMS and AGU.
His contributions were recognized by AMS's highest award, the Rossby Medal, in 1995. The award citation read that he was honored "for fundamental research contributions in the areas of the structure and dynamics of jet streams, fronts, cyclones, severe storms, and mesoconvective systems; and the behavior of the general circulation of the atmosphere."
In 1963 Chester W. Newton joined the National Center for Atmospheric Research (NCAR) to head up a Synoptic Meteorology Group.
His work on convective storms, cyclogenesis, frontogenesis, the Gulf Stream and jet stream, and numerous reviews to which he invariably brought new insights are well known. He retired from NCAR in 1990 and died at the age of 96, on April 15th, 2017. He has left the scientific community with important insights into a wide range of meteorological phenomena.
Dr. Eero O. Holopainen is an Emeritus Professor in Meteorology, at the University of Helsinki, Finland. His fields of expertise are meteorology and climate dynamics. After obtaining his PhD and doctorate title he worked as an Assistant at the Institute of Meteorology at the University of Stockholm in Sweden. He then returned to Finland to work at the Academy of Finland as the Assistant of Prof. Erik Palmén from 1962 to 1965. He continued his career in the USA, working as a researched at the University of Michigan, followed by a position of Extra Meteorologist at the Meteorological Center, where he eventually became the Deputy Director. At the same time, he was teaching at the University of Helsinki, first as (acting) assistant professor, then acting professor and eventually as Professor of Meteorology. He was elected Research Professor of the Academy of Finland for a 5-year term until 1989 and served as Visiting Professor at the University of Monash (Australia, 1976), the University of Princeton (USA, 1979) and the University of Wisconsin, Madison (USA, 1981).
Dr. Holopainen  was a member of the Scientific Advisory Committee of the European Center for Long-Range Weather Forecasts (ECMWF) 1976-1980 and 1983-1990, Member of the Scientific Committee of the World Meteorological Organization (WMO / ICSU) 1980-1986 and Member of the Earth Science Panel of the EU Human Capital and Mobility 1992-1994 . Holopainen was also chairman of the Geophysics Society in 1971, member of the Finnish Geographical Society as a member of the Finnish Academy of Sciences since 1974 and a member of the Finnish Science Foundation since 1975. His work was awarded in 1975 with the Finnish Science Foundation Theodor Homén Prize and in 1993 by the Geophysical Society with the silver Erik Palmén medal.