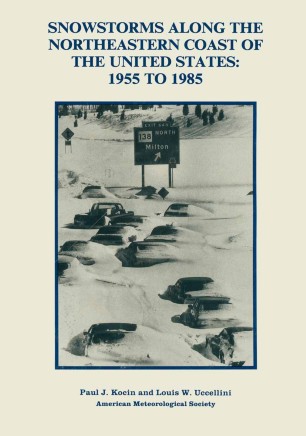 snowstorms along the Northeastern Coast of the United States: 1955 to 1985 documents 20 of the most crippling snowstorms that have affected the heavily populated coastal region of the Middle Atlantic states and southern New England over the last four decades. Heavy snowfall and high winds associated with storms often referred to as "nor'easters" can maroon millions of people at home or in transit, severely disrupt human services and commerce, and endanger the lives of those who venture out doors. Paul J. Kocin and Louis W. Uccellini provide answers to questions of how these important storms develop, what factors delineate snow/no snow situations, and what weather patterns provide clues that foretell such events. The book provides a comprehensive overview of this phenomenon from historical, climatological, and dynamical perspectives, using many illustrations, maps, tables, and color schematics. The introduction describes the major effects of such storms, the complex physical interactions that fuel their development, and the problems they present to forecasters trying to predict their fickle behavior and progress. A review of the great northeastern storms of the past three centuries follows, along with a climatology of the heavy snow events over a 30-year period. Descriptions of 20 major storms supply a framework for understanding the dynamical and thermodynamical processes that contribute to heavy snowfall. A summary of the physical processes that contribute to the storms concludes with issues that remain to be resolved. The case-study approach presents a great deal of material contained in hundreds of synoptic analyses in a well-organized and useful layout, allowing case-by-case comparisons of common features and differences. Extensive tables, diagrams, and photographs show weather patterns at the surface and aloft, emphasizing cyclone tracks and deepening rates, the contributions of cold surface anticyclones, cold-air damming and coastal frontogenesis, upper-level processes, jet streak circulations, satellite imagery, and three-dimensional air flow. It is hoped that this book will provide a foundation for researchers and students interested in investigating the processes that interact to produce major winter storms. The weather patterns described here provide a first step in the generation of conceptual models, and also serve as an easily referenced guide for forecasters concerned with predicting heavy snowfalls along the northeastern coast of the United States.