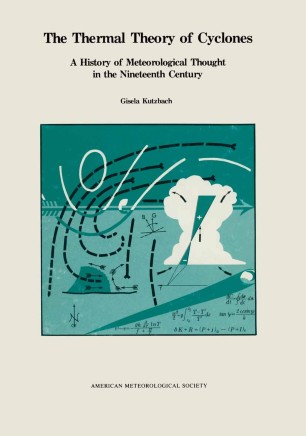 The Thermal Theory of Cyclones

A History of Meteorological Thought in the Nineteenth Century

Gisela Kutzbach has provided an unparalleled account of the mainstream of meteorological thought during the nineteenth and early twentieth centuries. This book takes us from the era of attempts to describe disturbances as mechanistic interactions of air currents, through Espy's introduction in the 1830's of the proposition that cyclones are convective systems driven by heat of condensation in central rainy areas, up to the distinctively different polar front theory of 1920, often considered as the birth of modern meteorology. Follies and controversies as well as successes are recounted, and in the tale the cast of characters, many of them acute observers or experimenters as well as theoreticians, and some crusty and dogmatic, are brought to life. The period was one in which basic concepts of thermodynamics, hydrodynamics, and energy conversions emerged with parallel accommodations to the special needs of meteorology. Influences of the development of synoptic meteorology and early aerology are thoroughly treated, essential mathematical expositions are presented in their original forms with explications, and theories and analyses are illuminated by numerous well-chosen figures and quotations. Concise but complete, and written in a style easy to comprehend, the treatise is a lively account of a lively time in the development of science. Kutzbach has succeeded well in her objectives, to provide "an insight in the particular problems and methods of problem solving in nineteenth century meteorology" and to illustrate "that science is a human activity and that its development is an open-ended process involving the constant testing of hypotheses."