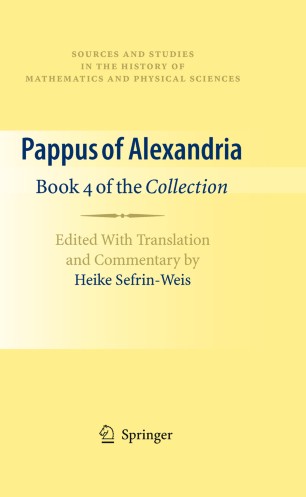 Pappus of Alexandria: Book 4 of the Collection

Although not so well known today, Book 4 of Pappus’ Collection is one of the most important and influential mathematical texts from antiquity, both because of its content and because of its impact on early modern mathematics after 1600. As a kind of textbook in anthology format, the mathematical vignettes form a portrait of mathematics during the Hellenistic "Golden Age", illustrating central problems – for example, it discusses all three of the famous ancient problems in geometry: squaring the circle; doubling the cube; and trisecting an angle – varying solution strategies, and the different mathematical styles within ancient geometry.

This volume provides an English translation of Collection 4, in full, for the first time, including:

Historians of mathematics will find it useful for scholarly work on ancient geometry and its reception in the early modern era and it will also serve as a source book for exemplary arguments in ancient geometry. Pappus himself probably intended Collection 4 to be an introductory survey of the classical geometrical tradition – from the point of view of mathematical methods and strategies – for readers that had a basic training in elementary geometry (Elements I – VI). Likewise, this edition can be used as a textbook in advanced undergraduate and graduate courses on the history of ancient geometry.