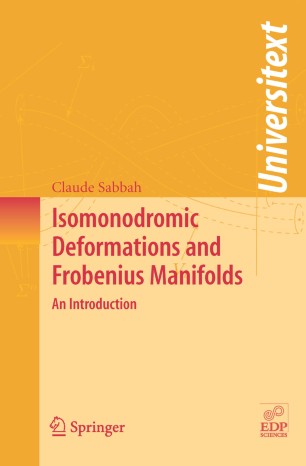 The notion of a Frobenius structure on a complex analytic manifold appeared at the end of the seventies in the theory of singularities of holomorphic functions. Motivated by physical considerations, further development of the theory has opened new perspectives on, and revealed new links between, many apparently unrelated areas of mathematics and physics.

Based on a series of graduate lectures, this book provides an introduction to algebraic geometric methods in the theory of complex linear differential equations. Starting from basic notions in complex algebraic geometry, it develops some of the classical problems of linear differential equations and ends with applications to recent research questions related to mirror symmetry.

The fundamental tool used within the book is that of a vector bundle with connection. There is a detailed analysis of the singularities of such objects and of their deformations, and coverage of the techniques used in the resolution of the Riemann-Hilbert problem and Birkhoff’s problem. An approach to Frobenius manifolds using isomonodromic deformations of linear differential equations is also developed.

Aimed at graduate students and researchers, the book assumes some familiarity with basic complex algebraic geometry.