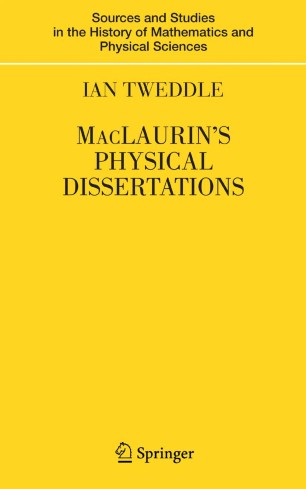 The Scottish mathematician Colin MacLaurin (1698-1746) is best known for developing and extending Newton’s work in calculus, geometry and gravitation; his 2-volume work "Treatise of Fluxions" (1742) was the first systematic exposition of Newton’s methods. It is well known that MacLaurin was awarded prizes by the Royal Academy of Sciences, Paris, for his earlier work on the collision of bodies (1724) and the tides (1740); however, the contents of these essays are less familiar – although some of the material is discussed in the Treatise of Fluxions - and the essays themselves often hard to obtain. This book presents these important works in translation for the first time, preceded by a translation of MacLaurin’s MA dissertation on gravity (Glasgow, 1713) which provides evidence of his early study of Newtonian principles.

In his essentially descriptive discussion of gravity MacLaurin ranges over planetary orbits, vortices and theology. His discussion of collisions includes a disputatious account of what should be understood by the force of a moving body, a contentious topic at the time. The essay on the tides has the original version of his celebrated theorem on the equilibrium of a spheroidal fluid mass and employs a remarkable combination of geometry and calculus to determine forces of attraction.

The aim is to make this material more generally accessible to researchers and students in mathematics and physics, and indeed to anyone with an interest in the historical development of these subjects. A general introduction puts the works in context and gives an outline of MacLaurin's career. Each translation is then accompanied by an introduction and a series of notes and appendices in which individual results are analysed, both in modern terms and from a historical point of view. Background material is also provided.