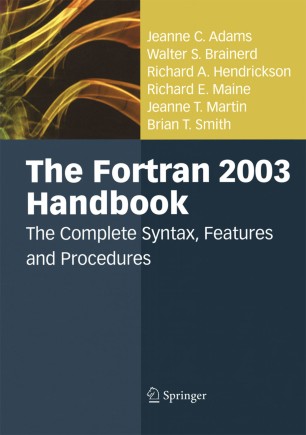 The Complete Syntax, Features and Procedures

Fortran continues to be the premier language used in scientific and engineering computing since its introduction in the 1950s. Fortran 2003 is the latest standard version and has many excellent modern features that assist programmers in writing efficient, portable and maintainable programs that are useful for everything from ‘hard science’ to text processing.

• The complete syntax of Fortran 2003 is supplied.

• Each of the intrinsic standard procedures is described in detail.

• There is a complete listing of the new, obsolescent, and deleted features.

• Numerous examples are given throughout, providing insights into intended uses and interactions of the features.

• Chapters begin with a summary of the main terms and concepts described.

• Models provide the reader with insight into the language.

This highly versatile and authoritative handbook is intended for anyone who wants a comprehensive survey of Fortran 2003, including those familiar with programming language concepts but unfamiliar with Fortran. It offers a practical description of Fortran 2003 for professionals developing sophisticated application and commercial software in Fortran, as well as developers of Fortran compilers.