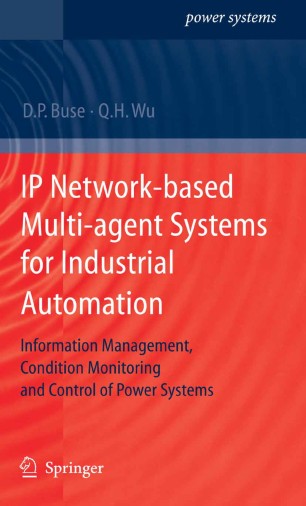 A mobile agent is a software program with the capability to suspend its execution and resume it on another computer. Agents are a relatively recent development in computer science, which have become a popular and useful methodology for the modelling and implementation of distributed systems, particularly those consisting of a number of largely autonomous components. The extensive use of multi-agent systems in various areas including information management, industrial control and manufacturing systems, suggests that the multi-agent systems methodology may also be appropriate for the design of power system automation systems.

IP Network-based Multi-agent Systems for Industrial Automation is the first book to present an introduction to the use of the Internet protocol suite and multi-agent systems for the information management, online monitoring and control of distributed power system substations. An open architecture is proposed, in which mobile agents are applied to the retrieval and analysis of substation data, and to remote operator intervention. A prototype implementation of this architecture is also described, which has been demonstrated and evaluated using a substation simulator.

IP Network-based Multi-agent Systems for Industrial Automation is an excellent reference for postgraduates, researchers and academics in engineering and computer science, as well as engineers in system automation and managers in distributed industrial systems.

Dr David Buse obtained a first-class BSc degree in Computer Science in 2000, and a PhD degree in Electrical Engineering in 2005 from the University of Liverpool, UK. He is a Member of IEEE. His research interests include mobile agents, multi-agent systems, and their industrial applications.

Prof. Henry Wu is the Chair of Electrical Engineering in the Department of Electrical Engineering and Electronics at the University of Liverpool, UK. He is also Director of the National Instruments e-Automation Laboratory at the University of Liverpool, in which research is focused on network-based industrial automation. He graduated from Huazhong University of Science and Technology (HUST), China, in 1978 and obtained an MSc (Eng) degree in Electrical Engineering from HUST in 1981. Prof. Wu is a Chartered Engineer, a Fellow of the IEE and a Senior Member of the IEEE. His research interests include systems analysis and control, computational intelligence, biologically-inspired modeling and computation, information processing and management, distributed complex systems, multi-agent systems, and their applications for power system operation and control.