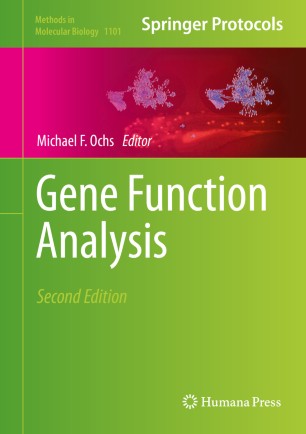 The determination of protein function has been a major goal of molecular biology since the founding of the discipline. However, as we learn more about gene function, we discover that the context within which a gene is expressed controls the specific function of that gene. It has become critical to establish the background in which gene function is determined and to perform experiments in multiple applicable backgrounds.  In Gene Function Analysis, Second Edition, a number of computational and experimental techniques are presented for identifying not only the function of an individual gene, but also the partners that work with that gene.  The theme of data integration runs strongly through the computational techniques, with many focusing on gathering data from different sources and different biomolecular types. Experimental techniques have evolved to determine function in specific tissues and at specific times during development. Written in the successful Methods in Molecular Biology series format, chapters include introductions to their respective topics, lists of the necessary materials and reagents, step-by-step, readily reproducible protocols, and notes on troubleshooting and avoiding known pitfalls.

Authoritative and easily accessible, Gene Function Analysis, Second Edition seeks to serve both professionals and novices with a growing understanding of the complexity of gene function.