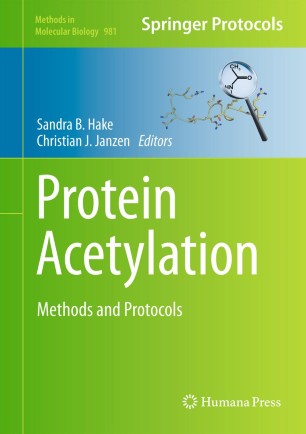 Thousands of proteins have been identified to be acetylated. Immense research power has been dedicated to experiments to solve the biological implications of each and every protein acetylation. Two particular sites of protein acetylation have been described intensively: the N-terminal methionine residue of a nascent protein and lysine residues within a protein. In Protein Acetylation: Methods and Protocols, expert researchers in the field detail many of the methods which are now commonly used to study protein acetylation. These include methods and techniques for identification of protein acetylation, column- and gel electrophoresis-based approaches, computationally prediction,  and the biological response to protein acetylation. Written in the highly successful Methods in Molecular Biology™ series format, chapters include introductions to their respective topics, lists of the necessary materials and reagents, step-by-step, readily reproducible laboratory protocols, and key tips on troubleshooting and avoiding known pitfalls.

Authoritative and practical, Protein Acetylation: Methods and Protocols seeks to aid scientists in the further study of the technical aspects involved in understanding protein acetylation.