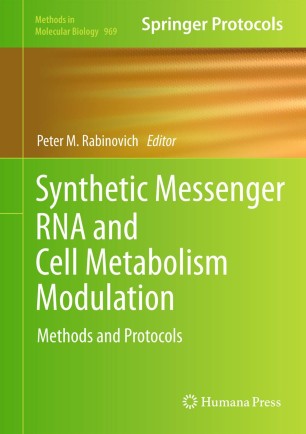 Synthetic mRNA is an attractive tool for mammalian cell reprogramming that  can be used in basic research, as well as in clinical applications. Present mRNA in vitro synthesis is a rather simple procedure, which delivers a high yield of quality product. Various modifications may be introduced into the mRNA by changing  the sequence of the DNA template, by modifying the reaction of transcription, or by post-transcriptional modification. mRNA, as a transfection agent, has several advantages over DNA, as mRNA expression is not dependent on nuclear entry and occurs directly in the cytosol. Synthetic Messenger RNA and Cell Metabolism Modulation: Methods and Protocols covers the typical main methods, such as mRNA synthesis, modifications, and delivery.  Examples of cell reprogramming and analysis in the fields of immunotherapy and stem cell research are also included. Written in the successful Methods in Molecular Biology™ series format, chapters include introductions to their respective topics, lists of the necessary materials and reagents, step-by-step, readily reproducible protocols, and notes on troubleshooting and avoiding known pitfalls.

Authoritative and easily accessible, Synthetic Messenger RNA and Cell Metabolism Modulation: Methods and Protocols will be of interest to researchers, clinicians, and biotech companies interested in mRNA-mediated cell reprogramming.