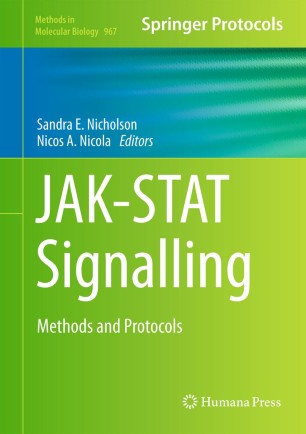 The receptor-associated JAK protein kinases and their substrates, the STAT transcriptional activators, transmit signals following cytokine and growth factor binding to receptors expressed on the cell surface, to result in specific transcriptional and cellular responses. Over the last two decades, the field has progressed from identification of the individual components through to an understanding of the activation and deactivation mechanisms, and the complex structural detail of the proteins involved. We now know that these pathways are important in many biological processes, including growth and development, hematopoiesis, and the innate and adaptive immune response. JAK-STAT Signalling: Methods and Protocols provides detailed methodologies for examining many aspects of the pathway. Divided into four sections, topics include JAK and STAT specific approaches, the negative regulators of the pathway (SOCS proteins), and the production and crystallization of JAK and STAT proteins, among others. Written in the successful Methods in Molecular Biology™ series format, chapters include introductions to their respective topics, lists of the necessary materials and reagents, step-by-step, readily reproducible protocols, and notes on troubleshooting and avoiding known pitfalls.

Authoritative and easily accessible, JAK-STAT Signalling: Methods and Protocols will be of use not only to those working in the area but also to new investigators who are led to delve into the complexities of JAK and STAT responses.