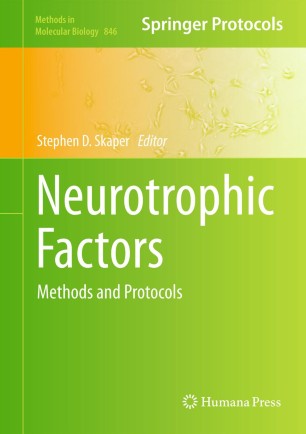 Nervous system development evolves from the well-orchestrated processes of neural induction, cell proliferation, differentiation, cell migration, survival, and synapse formation. Among these environmental cues, neurotrophic factors are secreted proteins that promote neurite outgrowth, neuronal cell differentiation and survival both in vivo and in vitro. Nerve growth factor (NGF) is the founding and best characterized member of the neurotrophin family of neurotrophic polypeptides. Neurotrophic Factors: Methods and Protocols presents a selection of protocols and procedures which make use of cellular, tissue, and whole animal models which can be applied to the investigation of neurotrophic factors and other agents impacting on these systems. Chapters cover a wide-range of topics such as dealing with the culture of neurons and glia from the central and peripheral nervous systems, neuron-glia co-culture models, and cell-based assays for the evaluation of neuroprotective molecules, as well as assays which can be applied to the study of agents with neuroregenerative potential. Protocols describing viral- and nanoparticle-based delivery methods to neural cells are also presented, following by chapters dealing with organotypic slice culture protocols. Lastly, several chapters are dedicated to in vivo lesion models of relevance to nervous system pathology, which can be applied to the investigation of neurotrophic factors and peptides. Written in the successful Methods in Molecular Biology™ series format, chapters include introductions to their respective topics, lists of the necessary materials and reagents, step-by-step, readily reproducible protocols, and notes on troubleshooting and avoiding known pitfalls.

Authoritative and easily accessible, Neurotrophic Factors: Methods and Protocols seeks to serve both professionals and novices alike with its well-honed methodologies in an effort to further our knowledge of what has been described as the last frontier of science.