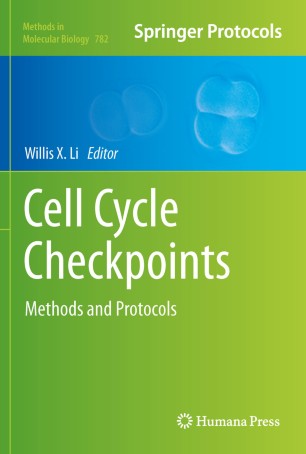 Cell cycle checkpoints control the fidelity and orderly progression of eukaryotic cell division. By controlling the orderly progression of critical cell cycle events such as DNA replication and chromosome segregation and ensuring proper repair of damaged DNA, cell cycle checkpoints function to ensure genome integrity. Mechanisms of checkpoint controls are not only the research focus of investigators interested in mechanisms that regulate the cell cycle, but are also the interests of researchers studying cancer development as it is increasingly clear that loss of cell cycle checkpoints, which leads to genomic instability as a result, is a hallmark of tumorigenesis. Cell Cycle Checkpoints: Methods and Protocols provides detailed descriptions of methodologies currently employed by researchers in the field, including those commonly used in the mammalian, yeast, C. elegans, Drosophila, and Xenopus model systems. Each chapter describes a specific technique or protocol, such as a method to induce cell cycle checkpoints in a particular model system, to synchronize a population of cells to allow observations of cell cycle progression, to identify genes involved in checkpoint regulation, and to study particular protein components of cell cycle checkpoint pathways. Written in the highly successful Methods in Molecular Biology™ series format, chapters contain introductions to their respective topics, lists of the necessary materials and reagents, step-by-step, readily reproducible laboratory protocols, and notes on troubleshooting and avoiding known pitfalls.

Authoritative and easily accessible, Cell Cycle Checkpoints: Methods and Protocols seeks to serve both professionals and novices with its well-honed methodologies in an effort to further our knowledge of this essential field.