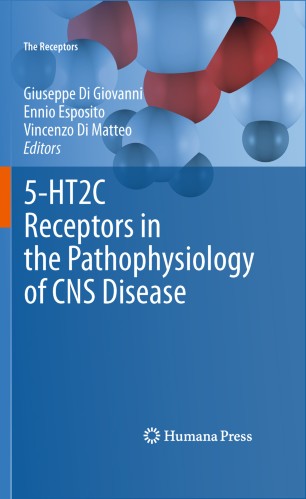 5-HT2C Receptors in the Pathophysiology of CNS Disease

Part of the The Receptors book series (REC, volume 22)

Research of 5-HT2c receptors stretches back twenty-five years, and while much of it has been productive, the past decade of research has been extraordinary in terms of both amount produced and insights gained. It is hardly surprising that 5-HT2c receptor research has grown so fruitful, given that it is a prominent central serotonin receptor subtype widely expressed within the central and the peripheral nervous system and is thought to play a major role in the regulation of numerous behaviors. It has further been shown by experimental and clinical observation that it may represent a possible therapeutic target for the development of drugs for a range of central nervous system disorders. The time, therefore, is more than appropriate to offer the first ever overview of the research of 5-HT2c receptors. Part of the popular and important series, “The Receptors,” The 5-HT2c Receptor provides a thorough update of the functional status of the 5-HT2c receptor. It covers the molecular, cellular, anatomical, biochemical and behavioral aspects of this receptor so as to highlight its distinctive regulatory properties and the emerging functional significance of constitutive activity and RNA-editing in vivo. In addition, the book investigates the receptors’ therapeutic potential in a range of different diseases, treated individually in separate chapters, including depression, drug abuse, schizophrenia, eating disorders, Parkinson’s disease, Prader-Willi Syndrome, Alzheimer’s disease and epilepsy. While not exhaustive, this text is a vital tool in understanding the past and inspiring the future of interdisciplinary research on the 5-HT2c receptor.

“The book is well presented with good use of diagrams … . There is a good mix of international authors with acknowledged leaders in the field being responsible for some key chapters. … In summary this is a useful book describing the properties of a receptor that may well turn out to be a therapeutically important drug target with selective ligands already being evaluated in phase II trials for control of appetite.” (R. G. Hill, British Journal of Clinical Pharmacology, May, 2011)
Buy options