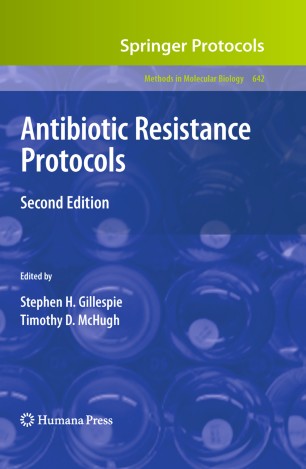 Since the publication of the popular first edition, genomic methods have become more accessible, allowing antibiotic researchers to probe not only the sequence of antibiotic resistance determinants but the mechanism whereby they are expressed and regulated. That, in concert with array technology and an understanding of the importance of biofilms, has greatly expanded antibiotic resistance knowledge. In order to reflect the growing field, Antibiotic Resistance Protocols, Second Edition fully updates and builds upon its first edition with contributions from leading researchers. Beginning with chapters on epidemiology and population genetics, the book continues with sections covering genomics and gene expressions, fitness mutation and physiology, and the detection of resistance. Written in the highly successful Methods in Molecular Biology™ series format, chapters include introductions to their respective topics, lists of the necessary materials and reagents, step-by-step, readily reproducible laboratory protocols, and notes on troubleshooting and avoiding known pitfalls.

Authoritative and up-to-date, Antibiotic Resistance Protocols, Second Edition brings together examples of a diverse range of modern techniques applied in antibiotic research in order to best aid scientists in planning their own future research.