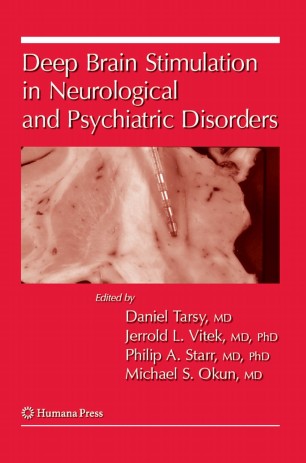 Written by renowned authorities in the field, Deep Brain Stimulation in Neurological and Psychiatric Disorders discusses today’s most current and cutting-edge applications of DBS. Initially used to treat Parkinson’s disease and essential tremor, DBS now has new clinical indications, new anatomic targets, and new technologies that enable an expanded role for DBS in the treatment of other movement disorders such as dystonia, and for other neurologic disorders such as epilepsy, Tourette syndrome and cluster headache. Early experience has also been reported for psychiatric syndromes, such as obsessive-compulsive disorder and depression. This important book begins with reviews of the functional anatomy and physiology of motor and nonmotor aspects of the basal ganglia and their connections which underlie the application of DBS to neurological and psychiatric disorders. This is followed by proposed mechanisms of action of DBS based on functional neuroimaging and neurophysiologic studies in animals and man. Discussions of patient selection, preoperative assessment, operative complications and brain targeting are followed by chapters concerning the demands of microelectrode mapping as well as new and emerging brain imaging approaches for target localization inside the operating room. Postoperative management and outcomes are reviewed in a series of chapters concerning immediate and delayed complications. Particularly important chapters on programming, DBS safety with regard to MRI and other electronic devices, neuropsychological sequelae, and quality of life are also included. Finally, new areas of DBS application are addressed by experts with experience in Tourette syndrome, epilepsy, obsessive-compulsive disorder, depression, and cluster headache. Comprehensive and state-of-the-art, Deep Brain Stimulation in Neurological and Psychiatric Disorders provides a balanced and level-headed approach to the use of DBS with emphasis on proper and objective assessment of outcomes, particularly in regard to the new and emerging applications -- all with the main goal of providing patients with some measure of relief from their difficult conditions.