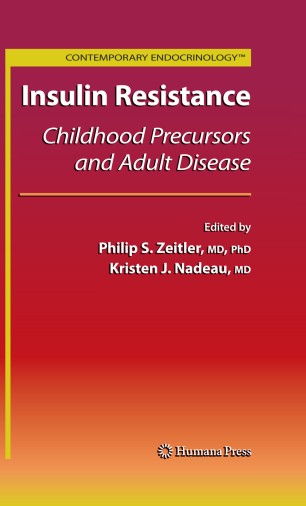 The prevalence of disorders related to insulin resistance has continued to increase throughout the developed and developing world. The world’s population has continued to become more obese and sedentary. Of great concern in the last decade is the extension of these deleterious lifestyle patterns to the pediatric population, leading to both obesity and the appearance of insulin resistance-related disorders in youth as well as adults. Insulin Resistance: Childhood Precursors and Adult Disease presents topics related to insulin resistance and its consequences across the lifespan. In the first section of the book examining epidemiology, the contributors review controversies over the definition of metabolic syndrome in adults and children, current knowledge regarding the epidemiology of insulin resistance in the pediatric population and the contributions of the prenatal and early childhood environment to the development of insulin resistance. The Second part of the book explores pathophysiology, with reviews of the techniques used to study insulin resistance, as well as current knowledge of the molecular and physiologic mechanisms of insulin resistance, including the contributions of adipose tissue and biochemical mediators. This section concludes with discussion of the relationship between insulin resistance and cardiovascular, endothelial, liver and gonadal disorders. The final section of the book explores the impact of exercise and weight loss medications on insulin resistance. Insulin resistance is likely to be the most important public health concern in many parts of the world in coming decades. This volume provides up-to-date reviews of these areas, providing the reader with a current perspective on issues in insulin resistance as they affect patients across the lifespan. The hope for Insulin Resistance: Childhood Precursors and Adult Disease is that it will spur continued interest in the topic on the part of clinicians and researchers, perhaps promoting new points of view and creative approaches to a daunting challenge.