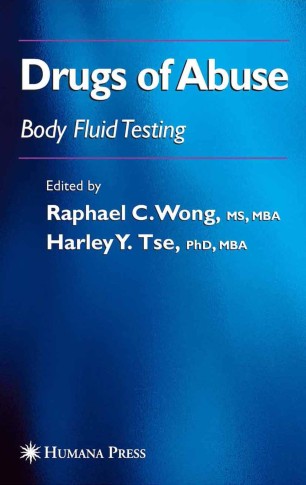 Part of the Forensic Science and Medicine book series (FSM)

Drug testing is now an established science that employs many new technologies and has become a multimillion dollar business directly and indirectly touching the lives of many people. In Drugs of Abuse: Body Fluid Testing, leading authorities review the science of drug testing in all its aspects, placing emphasis on technologies that use body fluids other than urine for determining the presence of drugs of abuse. The authors discuss the various body fluid specimens suitable for testing for illicit drugs-particularly saliva, sweat, and hair-describe the structural and manufacturing aspects of on-site testing devices based on lateral flow immunoassay, and detail the pitfalls sometimes encountered when using these specimens. They also discuss in detail the problem of sample adulteration and its detection. Since oral fluid has the best potential of succeeding urine as the next matrix of choice for drug detection, four popular saliva testing devices are examined: Intercept®, the Drager Drug Test®, Oratect®, and Drugwipe. Political, social, and legal issues are also considered in articles on privacy, the use of drug testing in courts, and the problem of sample adulteration. An international perspective is provided by a description of a large-scale roadside drug-testing program (ROSITA) in the European Union.
Comprehensive and authoritative, Drugs of Abuse: Body Fluid Testing offers not only an understanding of the theoretical principles behind these techniques, but also an up-to-date account of both the recent advances in drug testing techniques and today's optimal testing practices.