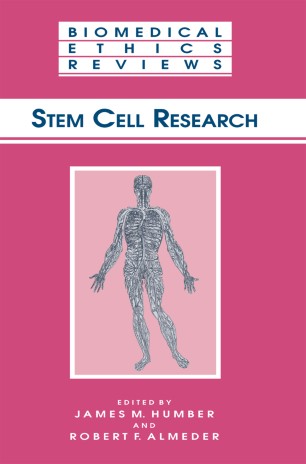 Stem cell research holds high promise of providing powerful new treatments for a number of debilitating diseases, even while it raises for some-as a form of human experimentation-a number of difficult moral problems. In Stem Cell Research, a well-seasoned panel of philosophers, ethicists, feminists, and historians examine these moral issues and introduce the principal arguments for and against such research. Among difficult issues considered are these: What reason (or reasons) are there for believing that human embryonic stem cells should (or should not) be accorded the protections ordinarily extended to full members of the human moral community? Would it be wrong to experiment with stem cells taken from human embryos, knowing that such experimentation would lead to the destruction of the embryos, even if they were about to be destroyed and discarded? Does the current use of human embryonic stem cells in research devalue humanity by treating these materials as mere "commodities"? Finally, are the current regulations on stem cell research unjust because they alienate women from their reproductive labor?
Broad in scope and objective in its coverage, Stem Cell Research offers both a balanced presentation and thoughtful critiques of the main arguments in the debate, allowing readers to reach their own conclusions on all the key moral issues associated with today's stem cell research.