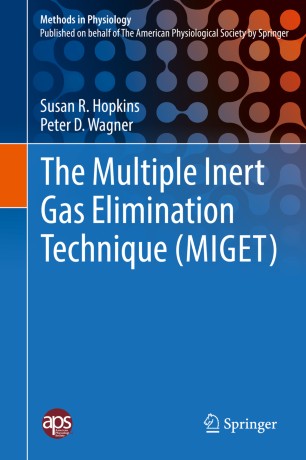 Part of the Methods in Physiology book series (METHPHYS)

This is the first book to bring together the history, theory, mathematical approach, measurement details and limitations of the Multiple Inert Gas Elimination Technique (MIGET) and a summary of the global literature on its application in health and disease over the last 40 years. Up to the early 1970's, and despite substantial research carried out by leaders in respiratory physiology, it was not possible to measure the most important and most complex component of gas exchange in the lung: ventilation/perfusion (VA/Q) heterogeneity. Building on that earlier research, MIGET was developed to overcome this large gap in our understanding of the most important function of the lung. Just as CT and MRI make use of multiple, simultaneous imaging views to reconstruct the underlying anatomy spatially, MIGET uses the simultaneous exchange of six inert gases with differing blood solubility to reconstruct the functional distribution of VA/Q ratios. While the basic physiological principle of MIGET is straightforward, using inert gas exchange data to construct the VA/Q distribution requires complicated mathematics along with the ability to simultaneously measure the exchange of six foreign gases present in just parts per million or less.

This unique book is a valuable resource for anyone interested in how the lung works.

Susan R. Hopkins MD PhD is a Professor of Medicine and Radiology at the University of California, San Diego. For over 30 years she has been studying the lung under conditions of stress: hypoxia, high altitude exercise and lung disease. After receiving her MD degree from Memorial University of Newfoundland, she graduated from the University of British Columbia with a Fellowship in Sports Medicine and a PhD in exercise physiology. Her interest in pulmonary gas exchange led her to UCSD in 1993 to work with Peter Wagner and learn MIGET first-hand, a collaboration which continues to this day. In addition to work in human athletes and patients, she has also explored the relationship between lung structure and gas exchange during exercise in a number of non-human species including monitor lizards, horses and emus, showing that across these divergent species ventilation-perfusion matching is remarkably well preserved. Recent work focuses on the use of functional proton MRI to characterize lung ventilation, perfusion and ventilation-perfusion matching in health and disease.  She is an Associate Editor of Applied Physiology Nutrition and Metabolism and the European Journal of Applied Physiology. She also serves on the NIH MEDI study section.

Dr. Peter D. Wagner is Emeritus Distinguished Professor of Medicine & Bioengineering at the University of California, San Diego in La Jolla, CA.  After obtaining his M.B., B.S. and B.Sc. (Medicine) degrees from Sydney University in 1968, he did postdoctoral work with Professor John West at UCSD in La Jolla, CA, USA.  He then joined the UCSD medical faculty and has remained there to the present time.  His research addresses the theoretical and experimental basis of oxygen transport and its limitations in the lungs and skeletal muscles in health and disease.  Many years ago, he developed the Multiple Inert Gas Elimination Technique for determining the distribution of ventilati

on and blood flow throughout the lungs. A more recent focus is on how the O2 transport system - the lungs, heart, blood and muscles - functions in an integrated manner to limit maximal VO2. He also works on muscle capillary growth regulation using molecular biological approaches in isolated muscle as well as in the intact mouse and human.  Of particular interest is the role of VEGF in this process. He has served NIH as a study section member and chair, professional societies as an Associate Editor of the Journal of Clinical Investigation and also of the Journal of Applied Physiology, was President of the American Thoracic Society 2005-2006, and was President of the American Physiological Society in 2010. He was Editor in Chief of the Journal of Applied Physiology from 2011-2017, and is current chair of the NIH Physiology and Pathobiology of Cardiovascular and Respiratory Systems individual NRSA grants study section. He has published more than 360 peer-reviewed research articles and over 145 invited chapters and other contributions.